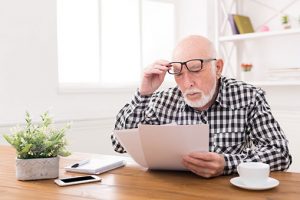 We often hear about how Id Theft Prevention tools protect consumers’ credit report and scores. I recently spoke to a consumer who experienced the exact opposite.

Sam’s issue with his credit card company started during this past Christmas holiday. While dealing with the hustle and bustle of the season, Sam took the time to sneak away from his family to make his monthly credit card payment online. When Sam entered his login credentials, he found out something was wrong. After confirming he entered his login credentials correctly, Sam discovered that he was not able to access his online account. Frustrated, Sam called the company and discovered his online account was frozen by his credit card company due to what they called unauthorized/fraudulent activity.

Freaked out, Sam wanted to get new login credentials so he could get online to make a payment and dispute any unauthorized charges. Sam’s credit card company refused to reactivate his online account and they said their policy was that he had to go to a branch and prove his identity. Sam informed the bank that he had a house full of guests and he could not drive 4 hours to their nearest branch. His credit card company said they would mail him a statement and switch him to paper statements going forward so he then would be able to make payments and see all the charges. Sam agreed and went back to his family activities.

After waiting a week or two, Sam did not receive his credit card statement in the mail so he called his credit card company. On this call, they indicated he was currently past due for his December payment and now his January payment was also due. Sam was upset because he did not get the paper statement he was waiting for so he was unable to verify the charges and make his payment. Not wanting to have a past due account, Sam made a payment by phone. His credit card company confirmed he will be getting his monthly statements going forward and all was fine.

Sam’s credit card company said they were protecting him from unauthorized use of his credit card but according to Sam, their protection ended up getting him a 30 day late and subsequent lower credit score. If this ever happens to you, I suggest to make an over the phone payment immediately and then stay on top of the issue daily until you are certain it has been resolved.

We use cookies on our website to give you the most relevant experience by remembering your preferences and repeat visits. By clicking “Accept All”, you consent to the use of ALL the cookies. However, you may visit "Cookie Settings" to provide a controlled consent.
Cookie SettingsAccept All
Manage consent

This website uses cookies to improve your experience while you navigate through the website. Out of these, the cookies that are categorized as necessary are stored on your browser as they are essential for the working of basic functionalities of the website. We also use third-party cookies that help us analyze and understand how you use this website. These cookies will be stored in your browser only with your consent. You also have the option to opt-out of these cookies. But opting out of some of these cookies may affect your browsing experience.
Necessary Always Enabled
Necessary cookies are absolutely essential for the website to function properly. This category only includes cookies that ensures basic functionalities and security features of the website. These cookies do not store any personal information.
Non-necessary
Any cookies that may not be particularly necessary for the website to function and is used specifically to collect user personal data via analytics, ads, other embedded contents are termed as non-necessary cookies. It is mandatory to procure user consent prior to running these cookies on your website.
SAVE & ACCEPT